The Soybean Crush May Tell Us When Grains Can Move Higher

Lots of wheat and corn around.

Grain prices are close to lows.

The October World Agricultural Supply and Demand Estimates report told markets that 2016 was the fourth straight year of bumper grain crops in the United States. The news did not come as a surprise to the corn, soybean and wheat markets as prices dropped throughout the summer and early fall as the crops grew. All three of the primary grains produced in the United States had another more than ample production season and global inventories stand at record levels.

One of the constants in the WASDE reports has been the growing demand for grains around the world. Demand has had little impact on prices as large crops overwhelmed increased world requirements but one only has to look back at 2012 when grains rallied to dizzying heights to see the potential for prices the next time there is a supply issue in the agricultural commodities.

The planting and growing season in the United States this year began in a different fashion than it finished. In June, things were not looking that good for the potential of another year of bumper crops. However, the wild markets in soybeans, corn and wheat in June faded quickly under just the right amount of sunshine and moisture that alleviated any fears of shortages. The fears of late spring came from the soybean market, and it is worth watching the oil seed in the months ahead for clues that 2017 may be a year of opportunity for those positioning for a recovery in the grain sector.

At the beginning of 2016, a palm oil shortage in Asia because of El-Nino related weather issues caused the demand for soybean oil to rise. As China stepped up imports of the oilseed product, the price of bean oil rallied through the first months of the year. 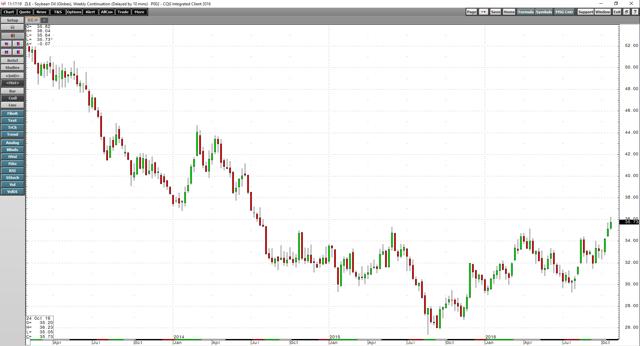 As the weekly chart illustrates, the price of soybean oil surged from 29.04 cents per pound at the beginning of 2016 to highs of 35.14 cents by the middle of April, an increase of 21%.

The price increase in the soybean product put pressure on South America to provide an abundant crop last winter but weather conditions in Brazil, Argentina and the rest of the region failed to produce the necessary supplies, so the price of soybean meal took off like a rocket ship.

In February, the price of soybean meal hit a low of $255.70 per ton, the lowest level since March 2010. However, when it became apparent that the South American crop was problematic last winter the price of the meal took off like a rocket ship. 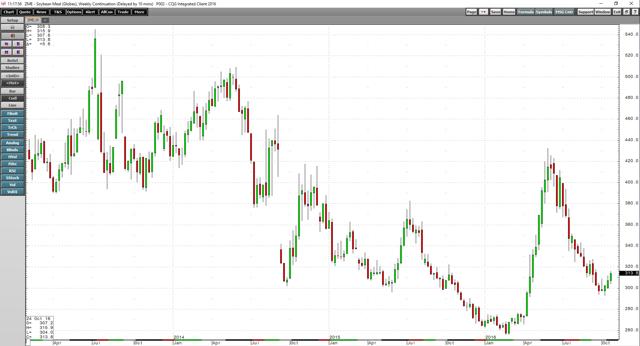 As the weekly soybean meal chart highlights, the rally from $255.70 to $432.50 at the end of May was spectacular. The rally of over 69% dwarfed the move in bean oil and launched soybean futures into the stratosphere during the planting season in the United States.

After three straight years of bumper crops in the U.S. the issues that caused problematic South American crop yields caused a flurry of speculative activity in the soybean futures market. 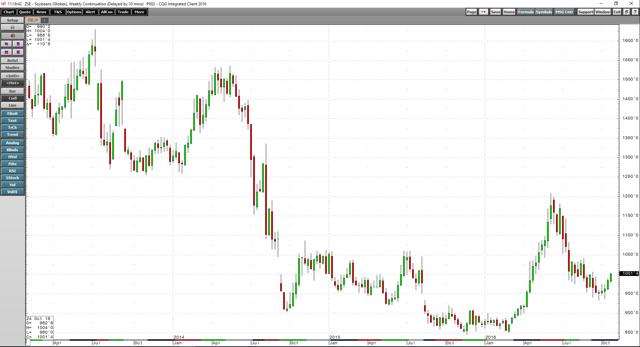 Soybean futures reached their low for the year in February at $8.49 per bushel. At first, the soaring demand for bean oil caused the price to move higher, but it was the explosive move in meal that resulted in speculative buying in the soybean futures market. As the weekly chart shows, the price rallied to a high of $12.0850 on June 6, an increase of over 42% from the year's lows.

In a case of soybean contagion, the prices of the other primary grains rallied in concert with the oil seed during planting and the beginning of growing season in the United States reaching highs in June. 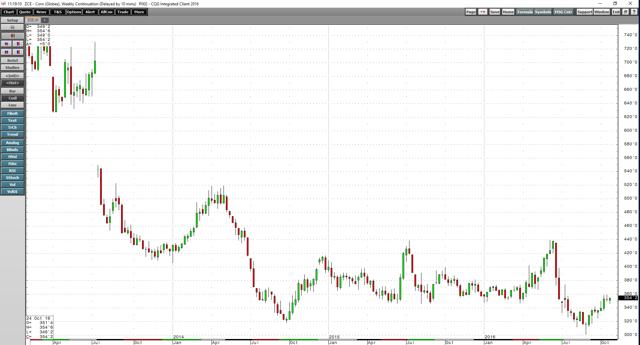 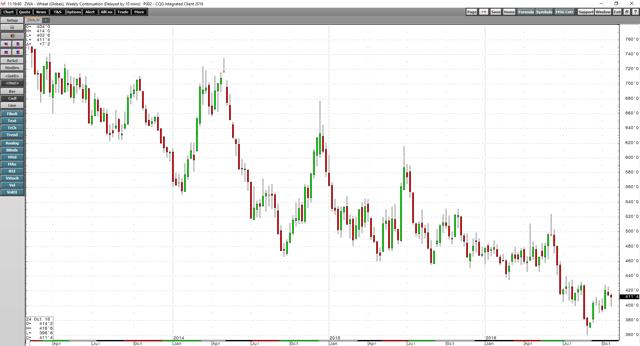 As the charts show, corn and wheat fell to new lows, below their levels in February, as the supply concerns at the beginning of the season disappeared into another year of bumper crops. The price of soybeans never fell below the February lows. In fact, it did not revisit the $9 level despite a huge U.S. crop during the 2016 season.

Lots of wheat and corn around

The October World Agricultural Supply and Demand Estimates report told markets that 2016 was the fourth straight year of bumper crops for all three of the primary grains. However, the report also highlighted that demand for grains around the world continues to grow to a new record level each year. Each year there are more people on our planet and they all need to eat.

There are plenty of carryover stocks of all three grains as we head into winter and the next South American growing season, particularly when it comes to corn and wheat. The USDA has reminded us that the world has become dependent on bumper crops and the next time there is a supply shortage in any or all of the primary grain markets the odds are that prices will move higher in a fast and furious manner. The explosive nature of the prices of soybeans and soybean meal during the spring of 2016 should serve as a model for the potential for grain prices in the years to come.

It was the prices of soybean products that ignited all of the grain markets in late spring 2016. 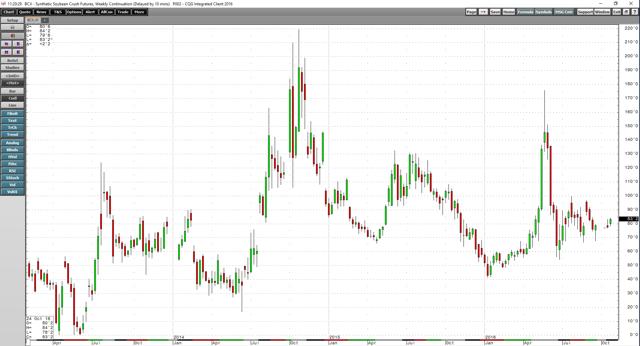 The synthetic soybean crush futures contract is the processing spread that reflects the economics of processing raw soybeans into soybean oil and meal. The crush rallied from 41.5 at the beginning of 2016 to highs of 175.75 in late May. An increase of over 323% in this key spread launched the soybeans and all of the grains higher in the spring of 2016. When it collapsed in late May, it signaled the top of all three grain markets.

In the wake of the October WASDE report, which was the final report card for the 2016 crop year, grain prices initially moved lower but then recovered in what was a case of sell the rumor and buy the news. The likely reason for the recovery was that demand continues to increase and prices were so low.

Grain prices are close to lows

In August, the price of wheat fell to the lowest level in a decade when it traded at $3.5950 per bushel. Corn reached its nadir at $3.01 per bushel, the lowest since 2009. However, soybeans never traded close to the early 2016 lows.

As of Wednesday, October 26, wheat, corn and beans were trading at $4.12, $3.54, and $10.11, respectively. All of the grains have recovered from the lows of the summer of 2016 despite massive supply levels. The soybean crush was last trading at the 83 level, well above the June lows of 54.25. The crush has been making higher lows since early October which coincides with the latest recovery in the prices of the three agricultural futures markets. There seems that a good correlation between the soybean crush spread and the rest of the grain sector has developed over the course of 2016. It is worth watching this processing spread over the months to come and as the 2017 season in the U.S. gets underway. The soybean crush spread could offer early clues when it comes to the path of least resistance for grain prices.

For the immediate future, it will be South American crop yields once again that can provide a spark to these markets that remain close to the lowest prices in years. It is a good time to start putting grains on your investment radar. With prices so low, the downside could be limited and the upside, as we saw last spring, explosive. Under current market conditions, buying on price weakness is likely to yield optimal results.

I have introduced a new weekly service through Seeking Alpha Marketplace. Each Wednesday I will provide subscribers with a detailed report on the major commodity sectors covering over 30 individual commodity markets, most of which trade on U.S. futures markets. The report will give an up, down or neutral call on these markets for the coming week and will outline the technical and fundamental state of each market. At times, I will make recommendations for risk positions in the ETF and ETN markets as well as in commodity equities and related options. You can sign up for The Hecht Commodity Report on the Seeking Alpha Marketplace page.